Drywood termites live in dry (usually <12% moisture), sound wood and derive their moisture requirements from the wood they consume. Infestations can occur in structural timbers in buildings, pieces of furniture, flooring, doors and doorframes, window trim, wooden picture frames, and other isolated pieces of wood. Their colonies are relatively small, with a few thousand members lacking the true worker caste, and there are often multiple colonies in the same structure. 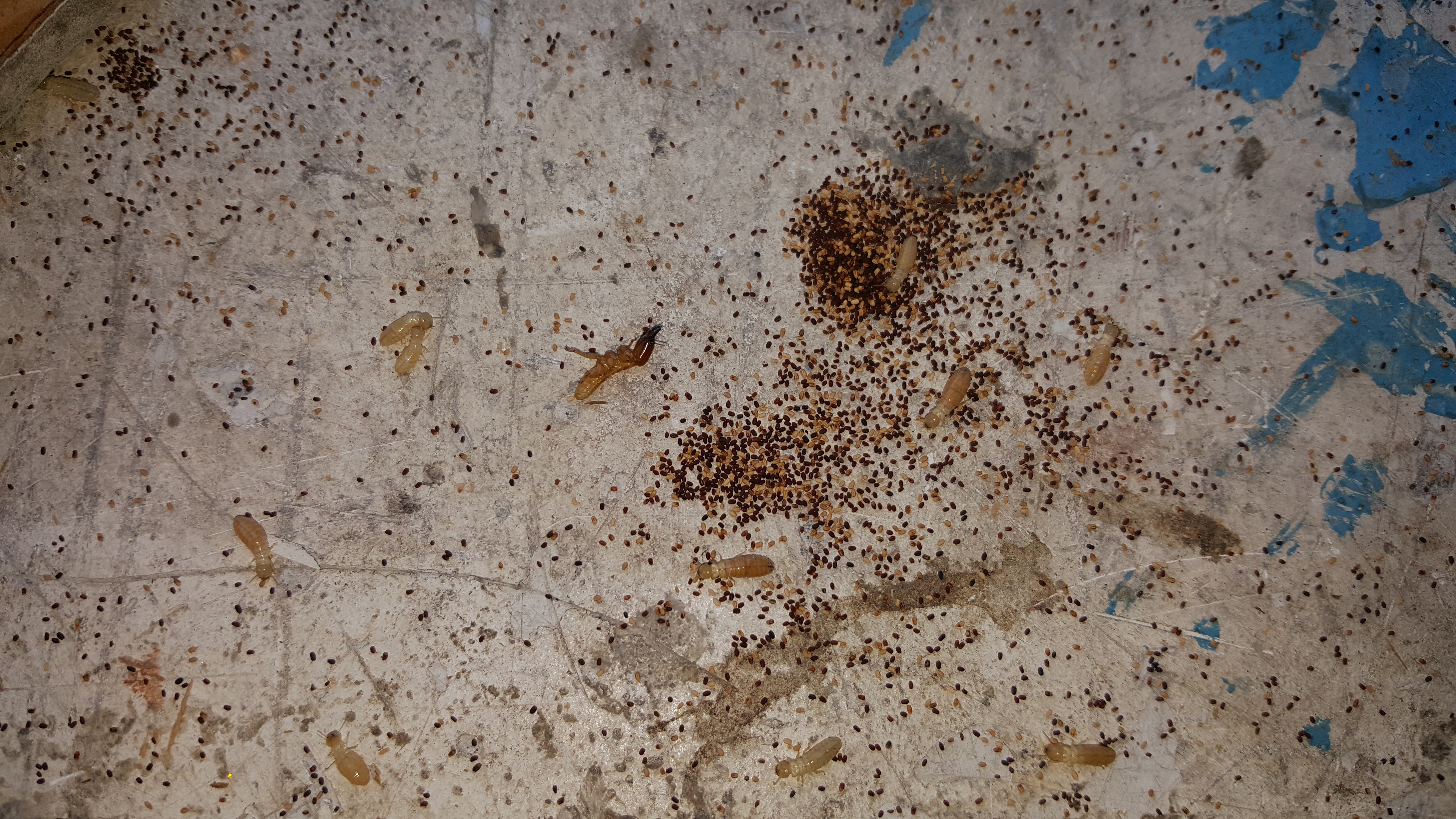 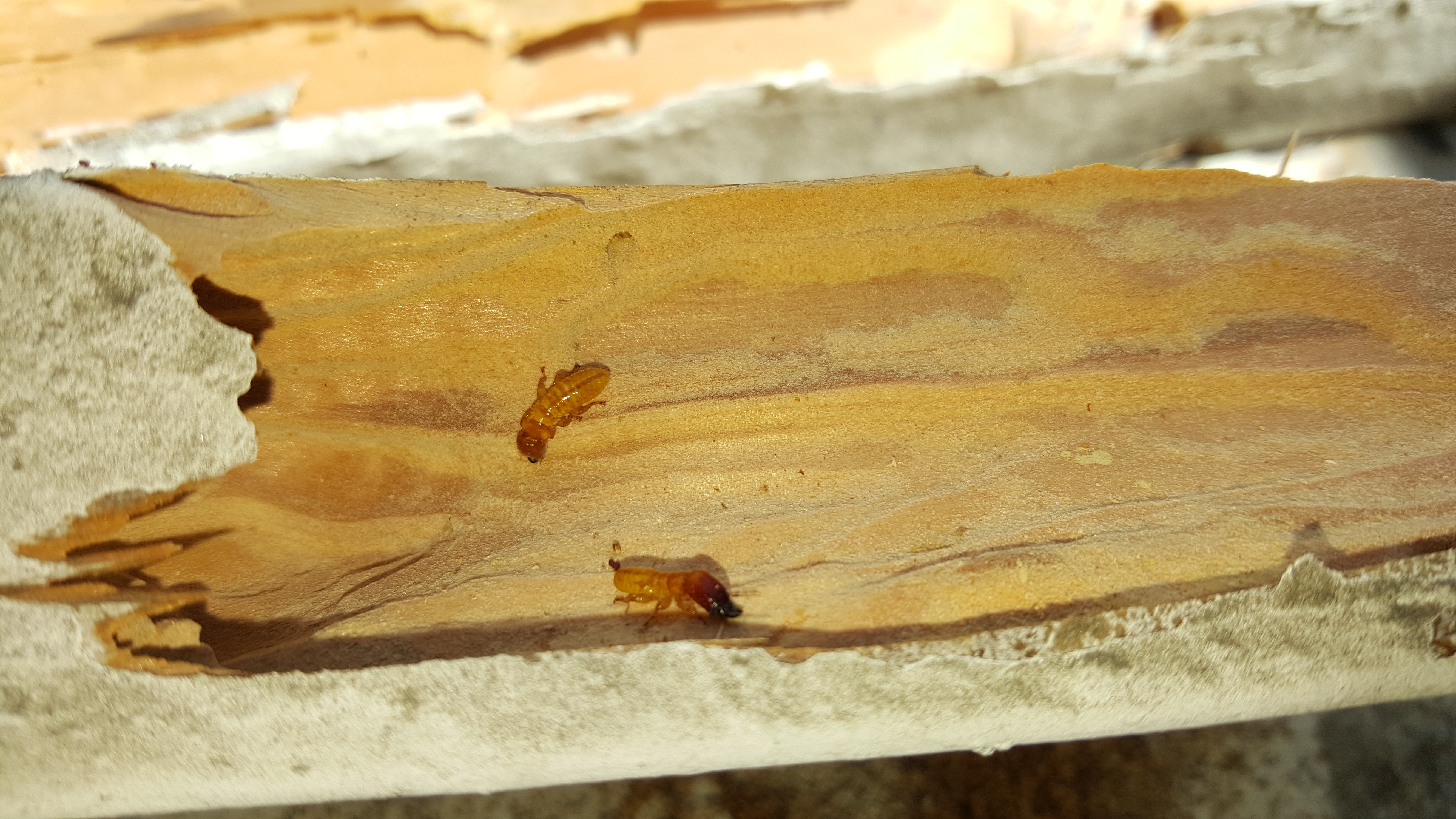 Drywood termites do not need a connection to soil and there is no soil in their feeding galleries. They do not build mud tunnels; they construct large, irregular galleries that run across and with the wood grain, with a very smooth, clean, and sandpaper-like appearance. The galleries are connected by openings small enough for one termite to pass through. The sure sign of drywood termite feeding is their fecal pellets that are ejected from the galleries via kickout holes, often found right below the damaged wood. These pellets are quite distinctive, and are hard, elongate-oval with rounded ends, and have six concave sides.

Approximately 400 global species of drywood termite species are known, but only a few species are important in the United States.

Powderpost or "furniture termites" (Cryptotermes spp.) have small fecal pellets and are smaller in size than other drywood termites. Their feeding in furniture or movable wooden objects can reduce wood to a fine powder. They can be found in Florida, southern Louisiana, Texas, Puerto Rico, and Hawaii. The most widespread species is the tropical rough-headed powderpost termite (C. brevis), which is easily distributed by human activity such as transporting infested furniture, and it has been found as far west as Los Angeles and as far north as Ontario, Canada.

The southeastern drywood termite (I. snyderi) is found primarily in seven southeastern states, South Carolina, Georgia, Florida, Alabama, Mississippi, Louisiana, and Texas. This species swarms at night, peaking between 8-10 pm, and is attracted to lights. The peak time period for swarming is late May through mid-June.

The Western Subterranean termite is the most common and most widely distributed termite in the western half of North America. It is a problem for homeowners from British Columbia in Canada south to western Mexico and east as far as Idaho and Nevada. This native American pest can enter structures through cracks less than 1/16" wide, even the minute openings found in concrete sl.bs, around dr.in pipes, and between the slab and the foundation. Western Subterranean termite colonies are usually located in the ground below the frost line but above the water table and rock formations. They are typically detected by the presence of the mud tubes they construct, or when large numbers of winged termites "sw.rm" or le.ve the colony to search out mates. Swarms occur in the daytime, and in California. they occur on w.rm, sunny days during the fall, winter or early spring. In the northern sections of the termites' range, spring swarms commonly occur in the absence of rainfall. Some quick facts about Western Sub termites • Although Western Sub termite colonies are largely located in the ground, secondary colonies can exist above ground if there is a constant source of moisture. • Western Sub termites will often build mud tubes for travel between their colonies and their food sources. • Damage caused by Western termites is most commonly found in the basement and at ground level, although the termites will .tt.ck wood .t higher levels. • Development from eggs to .adults may take more than 5 months, and workers may live from 3-5 ye.rs. • Swarmer’s are usually produced before the third or fourth year. • Research has shown that populations .re higher in urban areas than in undeveloped habitats. The termites prefer soil temperatures between 84-90° F - never above 104° F. Whatever the species, Termidor® termiticide/insecticide is your +answer If Western Sub termites are your problem, there's no need to worry. We have the answer to these and all subterranean termites: It's Termidor, the world's most amazing termiticide. Tests have shown Termidor to be 100% effective against subterranean termites in even the most challenging situations. It will eliminate your termites within 3 months of .application. No exceptions. No excuses. Termidor is a non-repellent If a termiticide is non-repellent, that means the termites can’t see it, smell it, or feel it. In fact, they don't know it's there at all. As a result, they'll continue to forage in treated areas. That might alarm you, but it's a good thing. Termites that are active in areas that have been treated with Termidor are helping to spread Termidor to more termites; they .re helping the termiticide do its job. Rest assured that in a short time all the termites-those you see and those you don't-will be controlled. Remember, Termidor kills in two ways First, Termidor kills termites when they eat it (and since they don't know it's there, they readily ingest it along with the wood fiber and other material they typically eat). Second, Termidor kills termites th.t simply come into contact with it. So, even if your termites are not feeding, Termidor will kill them. Termites th.t come into contact with Termidor will also carry it on their bodies. As a result, every other termite they contact, feed, or groom will also be exposed to Termidor. All these termites will in turn transfer the termiticide to still more termites. This will go on for several days, allowing Termidor to be spread throughout the entire colony. This unique mode of action is known as the "Transfer Effect”. The active ingredient in Termidor, fipronil, is slow acting. That’s a very good thing for you, and a very bad thing for the Western Sub termite colony. Why? Because Termidor remains active long enough for one termite to transfer the termiticide to a large number of other termites in the colony before dying itself. And although the Termidor effect on individual termites is intentionally slow, the overall colony impact is fast: it can be 2-6 times faster than bait systems. What to expect after application Certainly, every home is different, so the specifics of your Termidor treatment and results will depend on your home's age, configuration, construction, and level of infestation. Your Termidor Certified Professional will explain the best procedure for your situation. The entire application program is typically complete in a day or less; however, you may see some evidence of termite activity for several days afterward. That’s okay. Rest assured that Termidor is working, and its unique ingestion, contact, and "Transfer Effect" will eliminate termites from your home. Remember, responsible termite control demands periodic inspections by a licensed pest management professional you believe your home may be in danger form Western Subterranean Termites, contact a LEGACY TERMITE CONTROL professional now.

If you believe your home may be in danger from Drywood Termites, contact LEGACY TERMITE CONTROL now.